skip to main | skip to sidebar

The best way I can describe India is... vibrant.
I went for the food and the culture, and returned in complete amazement of the depth of it all.
I've never experienced so much color, spice, friendliness, confusion, variations in lifestyle... and I saw only the tiniest sliver. 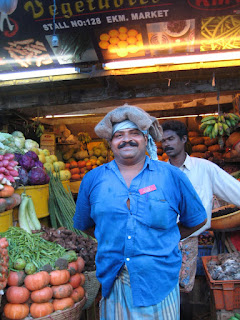 I went with a group set up through friends, 16 of us, to Kerala, the southwest coastal region of India. Kerala actually means "God's own country", and it's stunning. It's the spice center of the world, and I will argue that with anyone who dares. They grow a chunk of the world's peppercorn, cardamom, tea, cinnamon, nutmeg, allspice, vanilla... We went to markets, toured farms and plantations, and had cooking demonstrations at every stop, by chefs, mothers, fishermen, anyone who would cook with us.
I learned that curry is actually a leaf... tea is actually a tree - picked best during monsoon season... black, green, white, and red peppercorn is all from the same plant... indian okra isn't slimy like ours... and cardamom makes everything better... 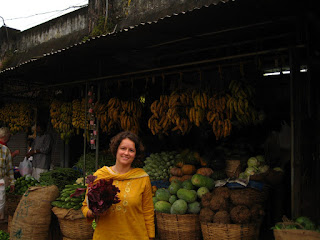 Beyond Kerala's food, there is rich culture. Kerala is predominantly Christian, with Hindus and Muslims making up most of the balance, and some Buddhists and even Jews (~15 families in Kochin). The Christians eat all meat, even though cows are off-limits in the Hindu culture (Hindus believe that all 365,000 Hindu gods and goddesses live in the belly of the cow). The Catholic church is alive and well in Kerala. We visitied a Sunday morning service, all in Malayalam, but I still got a sense of extreme devotion. Ayurveda is rooted in Kerala as well, a homeopathic traditional medicine and lifestyle that uses massage, oils, teas and herbs. Many Keralites use it as their healthcare. And we used it frequently throughout the trip. Imagine wet fish on an oily countertop. That is ayurvedic massage. 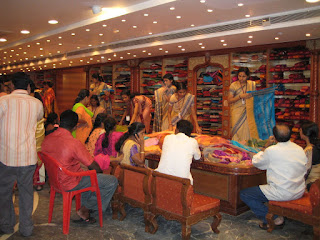 The colors are the best part - the decor and aesthetics, the dress, even hair ribbons. This is a sari store, 4 floors of shelving with the most beautiful colors and fabrics. They take pride in their colors. A favorite thing to do in 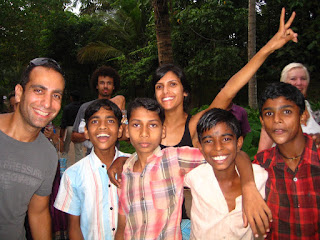 villages is photos. Everyone loves to have their photos taken, but you must show them on the screen. They love seeing their pictures, shaking hands, smiles go a long way in India...

We ate like royalty, and for many, it's actually how they eat daily. I didn't see any packaged anything; all meat, produce, spices and fruits are fresh and in bulk. They get their milk from cows, local spices and rice... It was delicious. Fresh curry leaves and coconut milk in almost every dish. Treats and dishes like oppams, chappatis, paisams, dosas, masalas...

There's so many wonderful things, I hate to even mention India's challenges, but unfortunately there are many. The cities, especially the big cities like Mumbai, are totally overwhelming with poverty, squalor, and filth. There are very poor water and waste management systems in India, and the city streets become dumps quickly. The roads are horrendous, and apparently the transportation authorities don't fix potholes unless they get a nice fee... The roads, dear god, the roads. If I never go back to India, it will be because of the roads. Buses, trucks, taxis, tuktuks, bicycles, pedestrians, and cows... all on the same road, some going the same direction, all going as fast as they can while avoiding potholes. Except the cows. They mosey right along, sometimes even obeying the stoplights better than the vehicles... 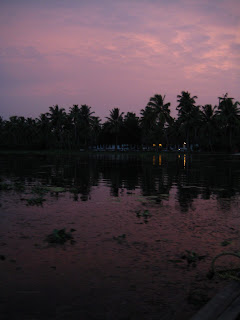 The saving grace to Mumbai was our visit with a couchsurfing friend and his family. Sachin invited me and Dad over to their apartment, where his mom cooked us the most amazing dinner. It was the most gracious thing I've ever seen someone do for strangers, and it set our trip off to the best start possible!

So many wonderful stories, much of it is portrayed in the pictures... enjoy! There are also videos of things like tuktuk rides, Independence Day Parades, rope spinning, etc... Photos and videos will be updated as more come in from other folks in the group.

This is a Flickr badge showing photos in a set called Favorites. Make your own badge here.